For The Record:
Memory refresher of a greedy art consumer

Appendix to Modern Dance Reviews: snippets of information about selected performances that I attended. The content is covered by Creative Commons License except when noticed otherwise. 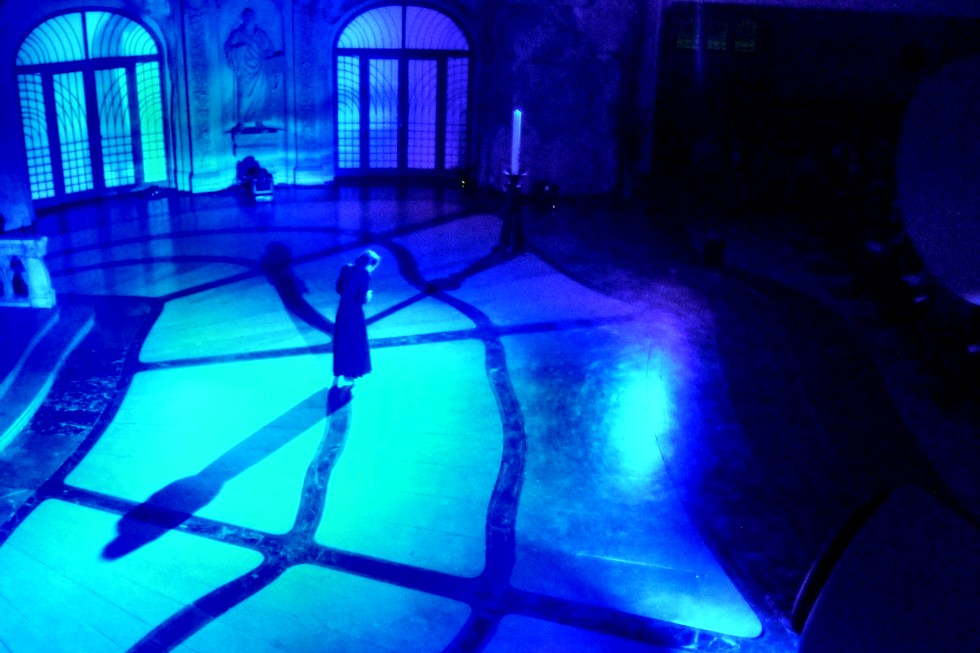 UT-OP.er: opera according to a book by Thomas Morus

In 1516 Thomas Morus wrote a novel "Utopia" which inspired Martina Veh (direction) and Alexander Strauch (music) half a millenium later to create an opera. The photo below shows insulators for high-voltage experiments at Dresden University where the opera was performed. 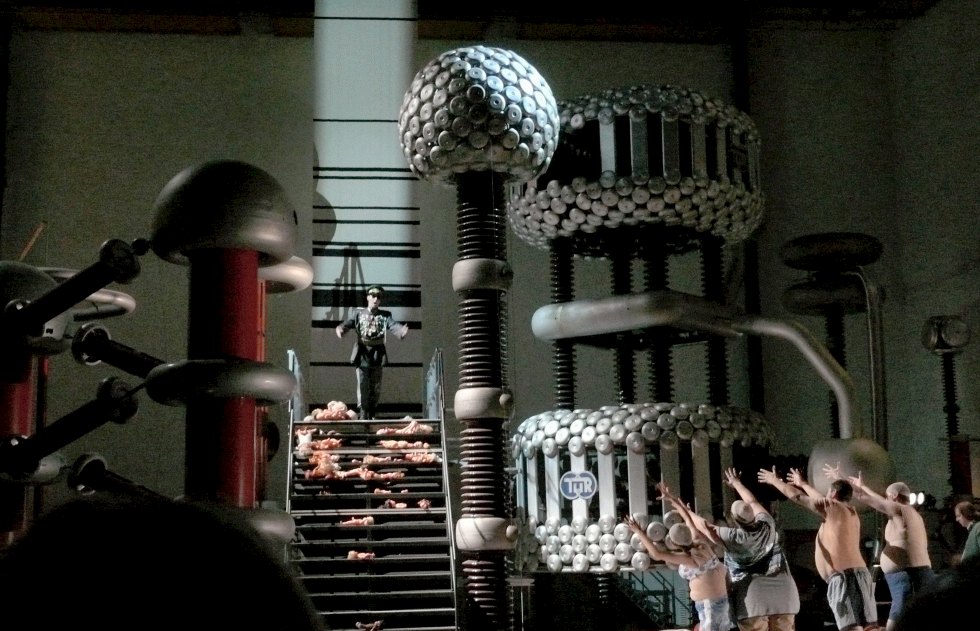 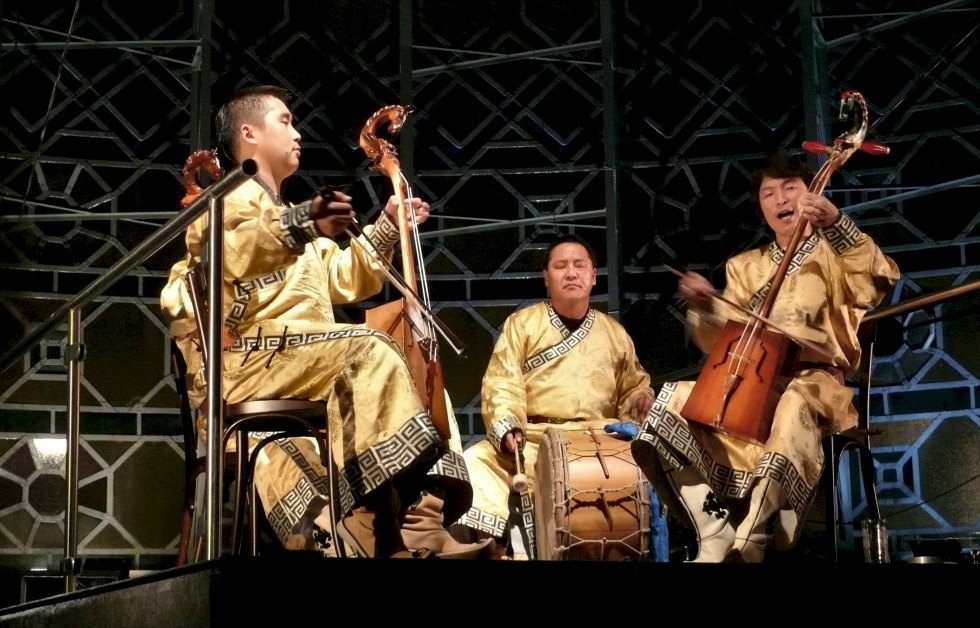 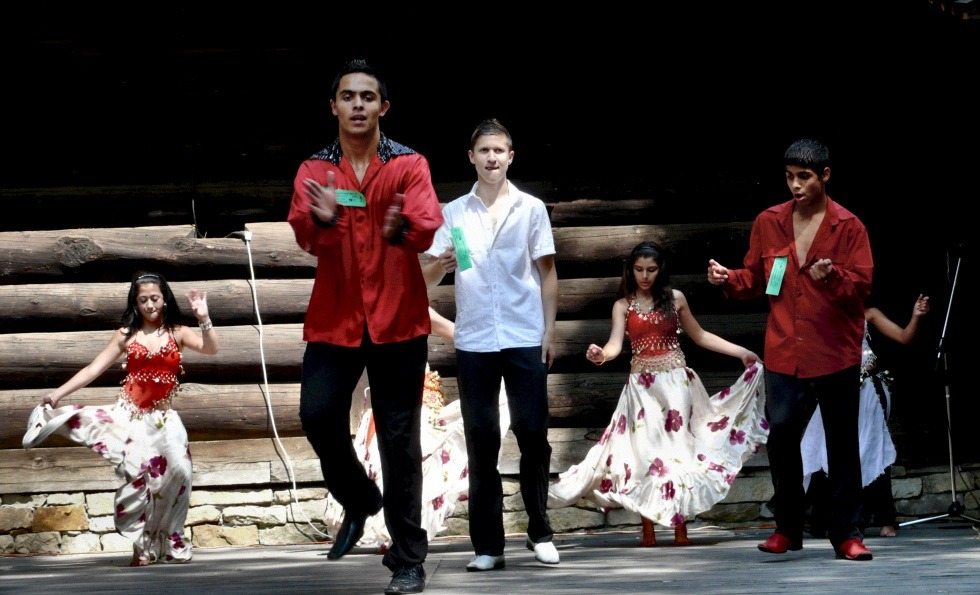 Johnny played a mixture of his own compositions, jazz standards and Latin rhythms. His intense and energetic performance was received with excitement, though Johnny avoided easy music (with a single exception of a Bolivian dance) and borrowed frequently from free jazz, including clusters played with a flat palm, an ellbow and a fist. 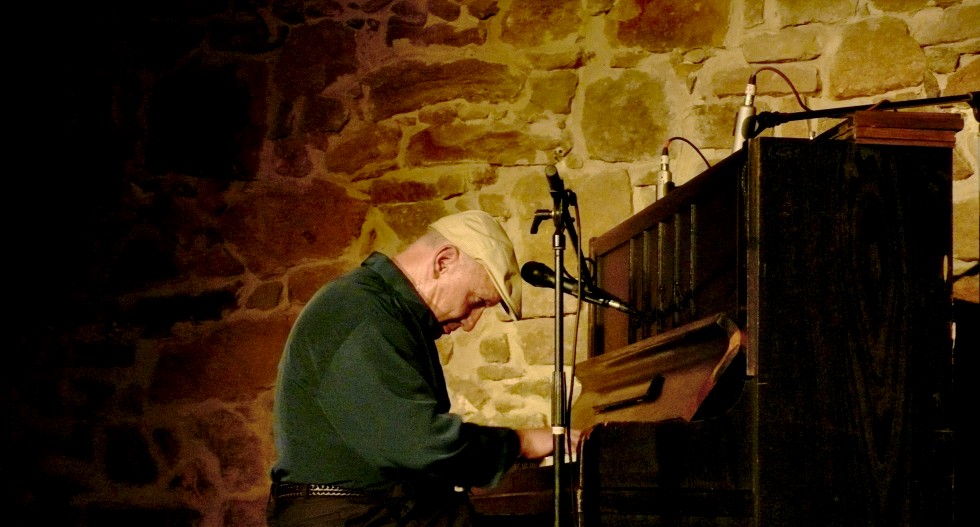 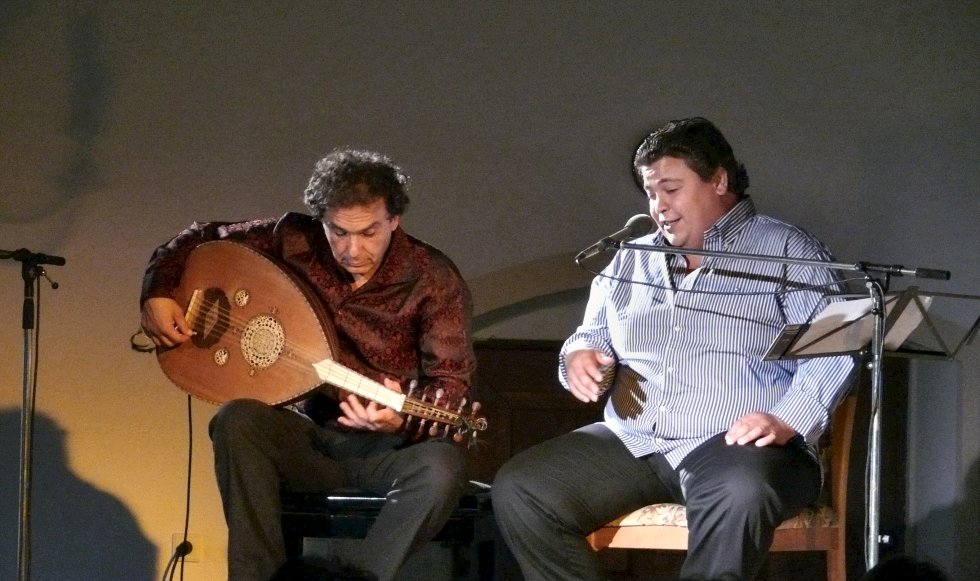 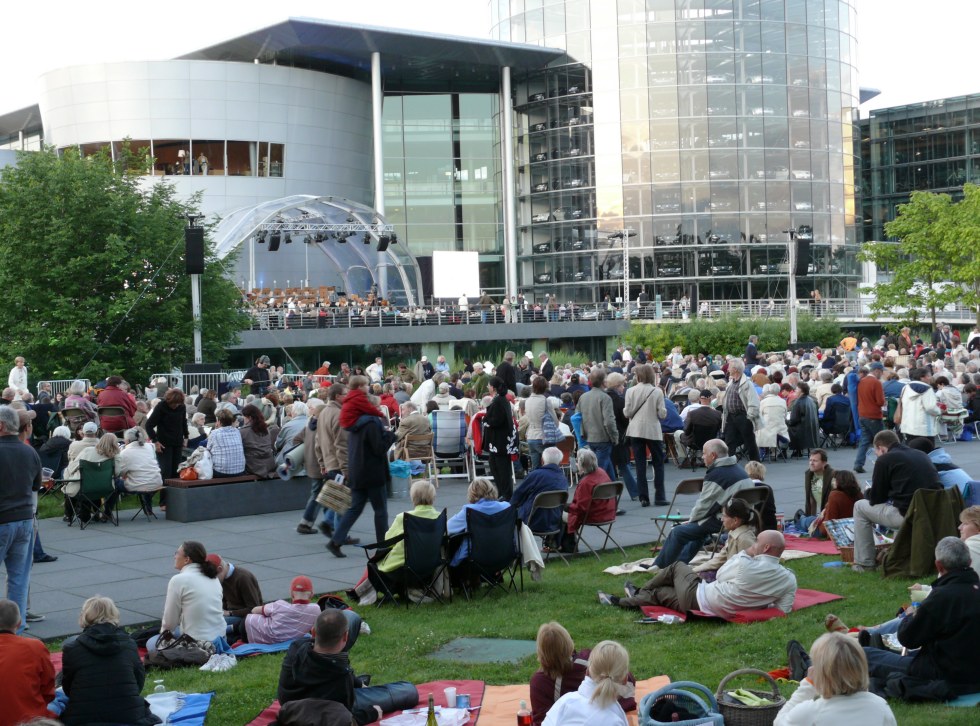 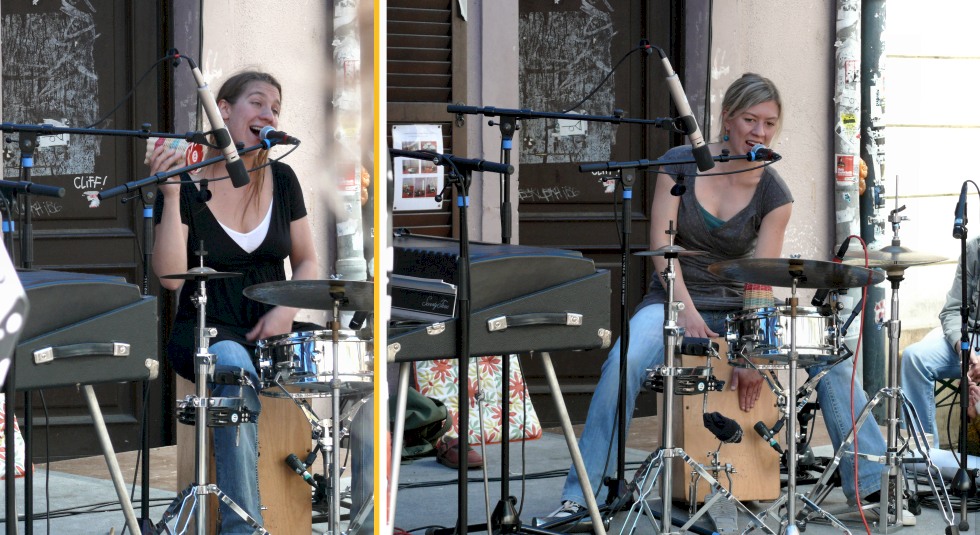 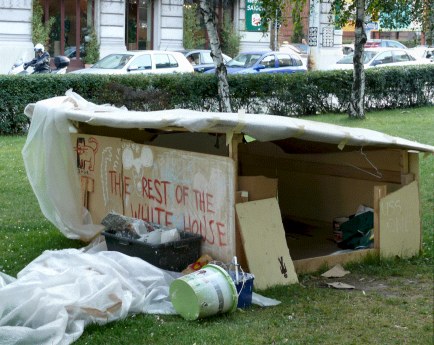 Pedestrians strolling in the garden of the Secession building noticed that something unusual was going on, but few realized that they were entering an Art Installation. Pawel Althamer blocked the exhibition building, leaving only a narrow tunnel leading to the garden. He manipulated the place by numerous minor, careful intervensions: building a small vegetable garden in an edge between highly frequented roads, hanging a dummy satellite dish made of an umbrella in a tree, fixing fragments of Anton Blitzstein's psycho-sci-fi texts on tree trunks, hanging a boat torso made by Donat Grzechowiak between tree crowns. The shack on the left was built by students for a local homeless.

But more importantly, and for sure much more tricky, was to populate the place. Because the purpose of his intervention was to initiate communication amoung social groups that are normally isolated, and which are not represented by random passengers, Pawel Althamer had to bring them in. We don't know how he achieved it: inviting the people, getting them excited for his project or paying them a honorary. But they were there, in all colors and tastes. A family of refugees with their childrens and baby carriages, handicapped people (a young lady in a wheel chair sang Beatles on the stage), smart and healthy looking young guys sitting in the grass with their notebooks (I guess students of the art school), the gay community. Ill and healthy, underdogs and winners side by side.


A mentally handicapped young man repeats a bowing ritual with grimasses, over and over, on a concrete area at the entrance. Nobody seems bothered or even interested. This coexistence is an achievement of its own, though Althamer's intention to enable communication across class borders - he even arranged for a camp fire to nourish such interactions - was not that successful.

Willingly or not, people entering the space by chance or out of curiosity become part of the event. Public participation means giving away the control and even the authorship, which has a great potential but also many pitfalls. Although the idea is not new, searching for new ways of exploiting it continues to be a challenge for performance art. 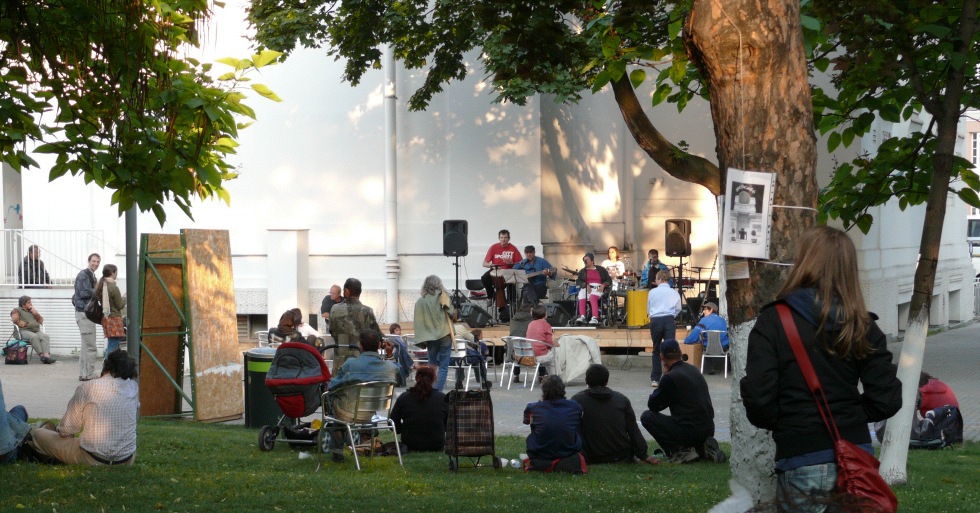 triOzean is Olga Nowikow on piano, Krishan Zeigner on drums and Lars Födisch on bass. triOzean played after Matthias Rethberg Trio, which is a well-known name in Dresden's jazz scene while triOzean is a newcomer, in frame of "Jazz in the Church" series.

I reported about the performances of Krishan Zeiger, the drummer of triOzean, already three times: in Nicht fallen in 2007, Suenos del Sur in 2008, and Mementos Vividos in 2009, always with choreographies by Cynthia Gonzalez. 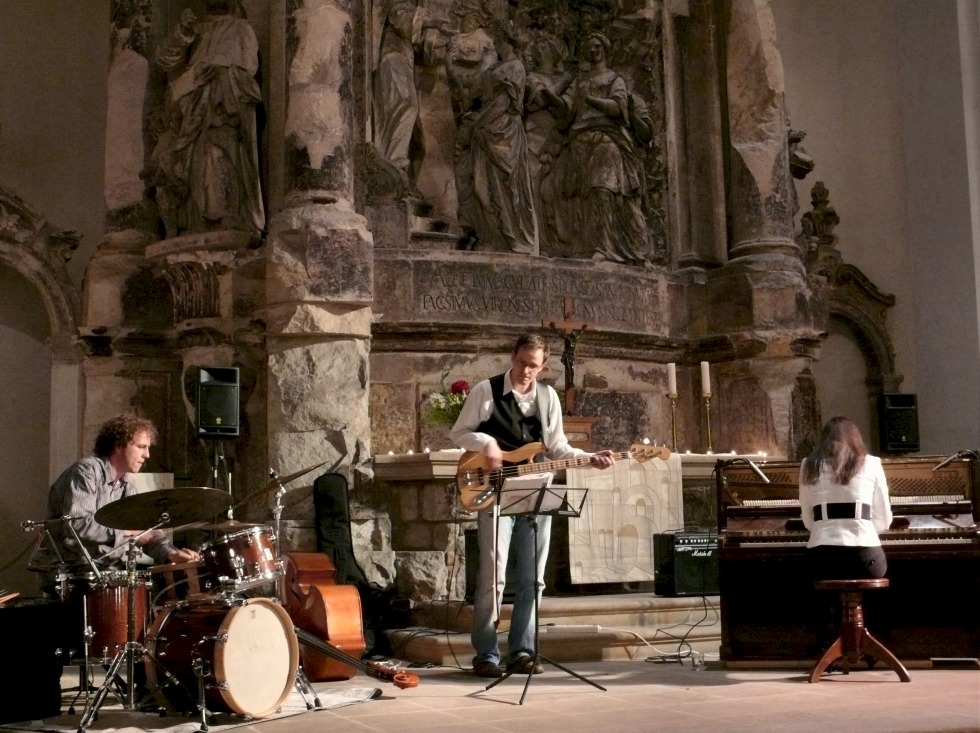 Dance group of the University of Costa Rica 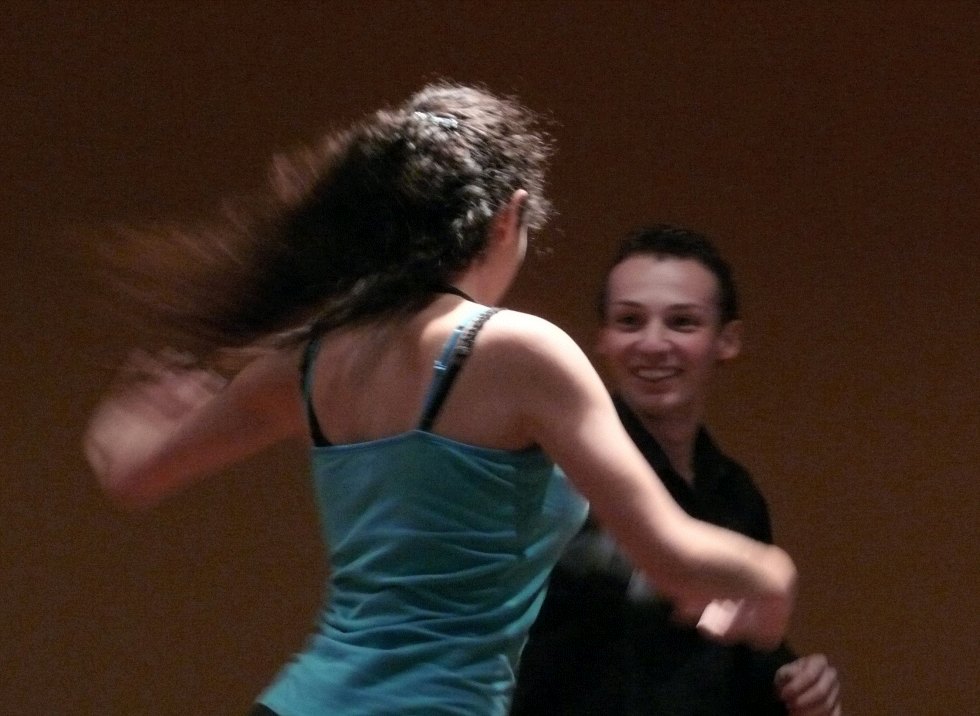 "Schola" - Christmas concert in a wooden church in Beskydy mountains

Head of the choir Pavla Mikeskova in the middle. See also photos of 2006 with two MP3 recordings. 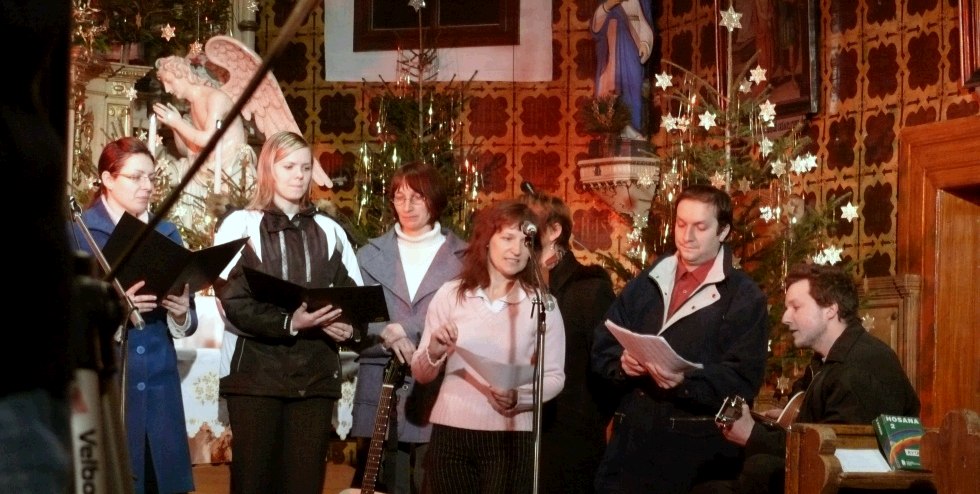